This is a short story that is being written one letter a day. A word can take over a week to finish and during that time the original word may have been forgotten, recalled, rejected and replaced. There are several rules I observe about marking missed days, punctuation, etc.


The interior narrative I am attempting to transcribe changes frequently, but the story may not necessarily reveal this. It is a thread of one person’s life that is not shared often despite this thread shaping much of it. I expect the story to be finished in ten to fifteen years’ time.

The story has changed innumerable times since I started it in January of 2011, though few of these changes can be perceived. My powers of recollection are unreliable, the way the narrative feels to me, and my mood when re-engaging with a sentence can change from day to day. And yet, the story is a steady drip describing a heart’s dislocation and its break; it is an exercise in memory and a slow record of its betrayals or the fleeting epiphanies it gives rise to. It is document of despair and of hope. 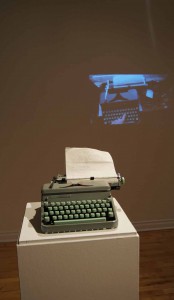